This is very, VERY sad news.

After two years of fighting and suffering with throat cancer, the French qanoun player, and co-founder of Ensemble Al Kîndi (with his close friend, Adel Shams El Din) and the heart and driving force of bringing Arabic Classical, Sufi, and Ottoman musics to the attention of the world, passed away peacefully in Paris at 3:00pm, January 2nd, 2015.

I'm too torn up about this to write more, so I am reposting here an excellent memorial piece written by composer Kareem Roustom:

R.I.P. Julien Bernard Jalaleddin Weiss. An 'outsider' from France, you came to see the classical music of the Arab world as real cultural treasure at a time when most in the region only saw it as a decayed relic to be abandoned or as something that needed to be 'updated'. Rightly, you felt that this music was one of the major musical traditions of the world and deserved to be placed on the same level as Western and Indian classical musics. You dedicated countless hours to practicing the qanun and put in thousands of miles of travel seeking out the best teachers in the Arab world. You became a very fine qanun player and an ambassador for Arabic classical music. In addition you sought out old repertoire, seeking connections to the past thereby pointing to a time of significant cultural creativity and openness to other points of view. Your vision was to bring to life the Al-Kindi ensemble by bringing together the best practitioners of this music to make world class recordings and to perform at some of the finest concert halls and festivals in the world. Through excellent program notes and engaging, and well written liner notes you made this music accessible to non-Arabic speakers. After years of hard work by you and the members of Al-Kindi, you began to achieve much success and those who at first said 'who wants to play this music anymore?' now called to ask if there were any places for musicians in the ensemble. Still, there were always critics and the Arab world is not one to hide its petty jealousies but you continued, undaunted, along with the redoubtable percussionist Adel Shams El Din, the souflul oud player Mohammed Qadri Dallal, and many others to make superb recordings and to produce memorable concerts. For this, I am grateful and I owe you a debt for the wonderful music you introduced me to and for the thoughtful and artful way in which you and your fellow Al-Kindi members presented it. I am also grateful that you had the vision to record some of the finest vocalists from the Arab world, a number from Syria, in order to preserve something from the coming storm that has destroyed so much. Now you join other late members of the Al-Kindi ensemble (Sabri Moudalal, sheikh Hamza Shakour, Adib Al-Daikh and others) in a place where your music will ring eternal. Thank you, and may God rest your soul. 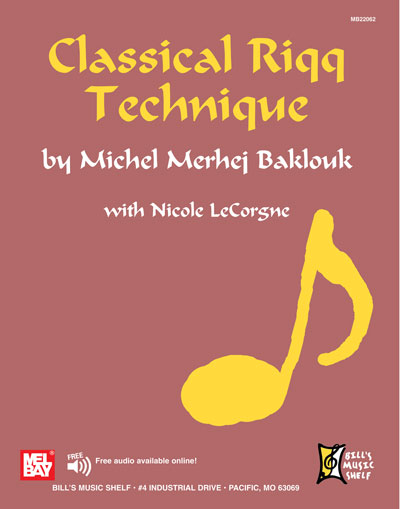 Very Highly recommended for riqq players interested in not only playing the riqq correctly, but also on Arabic music of the 20th century,  the classical repetoire and the place, and importance of the riqq historically.

A Basic Discography for Riqq Players

Ulm Kalthoum -  Al-Atlal, Alf Leila we Leila , Ana F'entezarak , El-Hobb Kolloh, Enta Omri, Fakkarooni, Helm, Howwa Sahih, Leilet Hobb, Lessa Faker, Rubaiyat Al-Khayyam, Zekrayat and so much more. Ulm Kalthoum is widely regarded as the greatest female singer in Arab music history.  Every song is a treasure trove for any riqq player. Seek out the rarer discs between 1930-1955 such as Helm, which are very highly recommended being that the Greatest Riqq player ever recorded, Ibrahim Afifi, who sadly died in the late fifties before television could capture him on video, plays on those discs.  After Ibrahim's death, several other riqq players stepped in to substitute, but it was Hussein Mouawed, one of the lesser of therenown riqq players of that time, who continued in this position, but his playing sadly lacks much of the virtuosity of Ibrahim Afifi.    http://almashriq.hiof.no/egypt/700/780/umKoulthoum/Songs/ ,  http://krwetatnt.net/vb/f187/

Abdel Halim Hafez - Ahwak, Nebtedi Minen el Hekaya, Fatet Ganbina, Zay el Hawa, Sawah, Hawel Teftekerni, Aye Damiet Hozn, Mawood, Kiriat Al Fingan, and many others.  Abdel Halim's orchestra was the incomperable El Masseya, whose percussionists were led by the fantastic riqq soloist Hassan Anwar, one of the 3  most renown riqq players of that time in Egypt from1950 - to1980 ( Hassan Anwar, Samir Ben Yamine (Samir Khalil), and Muhammed Al Araby).  El Masseya was also often the orchestra for Mohammed Abdel Wahab, Wardah, Farid Al Atrash and many of the most famous singers of Egypt during this period.  http://www.7alim.com/,

Simon Shaheen - Turath. The riqq player here is the legendary Samir Khalil, also known in Egypt as Samir Ben Yamine one of the three most renown riqq soloists in Egypt along with Hassan Anwar and Mohammed El Araby from the 1950's to the 1980's.  Samir was the riqq player who in the early 70's inspired Adel Shams El Din to become a riqq player. Samir later left Egypt to continue his career in London and the U.S. until his death in the late 90's. http://www.simonshaheen.com/biography

Anything by Ensemble Al Kindi with the great Adel Shams El Din. Some of the best recordings of Arabic and Ottoman classical and traditional music played by a wonderful ensemble and the greatest riqq player alive today. (unfortunately much of their disks are now out of print, but some can still be ordered from Amazon)  http://alkindi.org/anglais/disco_us/disco_us.htm

Adel Shams El Din - 40 Rhythms from the Middle East. Essential! Besides what's contained on the disc, even the CD book is a valuable resource on Arabic Rhythms in itself!  An absolute treasure!

Ustaz Hasan passed away of a heart attack on the morning of May 5, 2011. His loss is a great blow to those of us who knew him, but also to traditional instrument making in Egypt which is a dying art. He will be very sorely missed. Aleyerhamoo!

Ustaz Hasan's brother, Adel (below), is now in charge of his shop and has said he plans to continue the tradition of his brother in making traditional fish skin riqqs and clay darbukas. We wish him the best of luck and hope he is able to keep the legacy of Hasan alive for many years to come.

Start a Free Blog at Webs.com